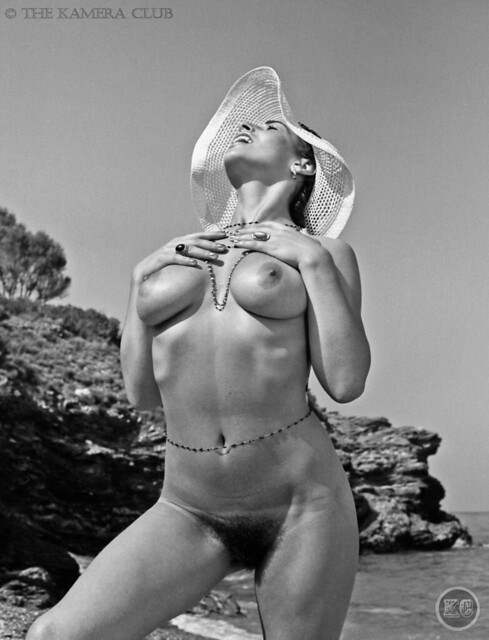 The final one for today and I’ve left the best to last (in my opinion), with a stunning shot of Leonarda Colombo by Terry Sparks.

After my last shot from Terry, he contacted me again with some more new shots, including this one and some more great little stories attached. Terry mentioned that the trip to Rhodes was financially quite lucrative and so the following year he took another three girls to Crete for a week in May, 1972. It was a disaster due to the fact that it rained all day and every day until the day before they were due to fly back. So they worked like crazy on that final day and managed to get a few decent shots, including the one above. The girls were Jeanette Marsden, Leonarda Colombo and Pippa Pascale and I’ll reveal more about those girls later, as I have shots of them all.

I’ve never come across Leonarda before, if that is indeed her real name, but what a stunning shot Terry managed to capture of her, her body and let’s not forget that magnificent bush on display! I may be biased here, but Terry’s work always manages to amaze me, from the way he gets the model to pose, looking so natural in doing so, to the clarity of the shots, under the circumstances 🙂 I have a growing collection of shots from Terry, which I’m proud to show off on this site and always enjoy the next set of shots that thankfully come my way and long may that continue. You also forget looking at these shots that they are over 40 years old and it’s no wonder that the likes of Russell Gay and others were more than happy to publish Terry’s work whenever they could. Saying that I’m sure there must be out-takes for shots with the models I haven’t seen, as Terry only sends through the best shots, but who wouldn’t 🙂

Thanks as always to Terry for another stunner!