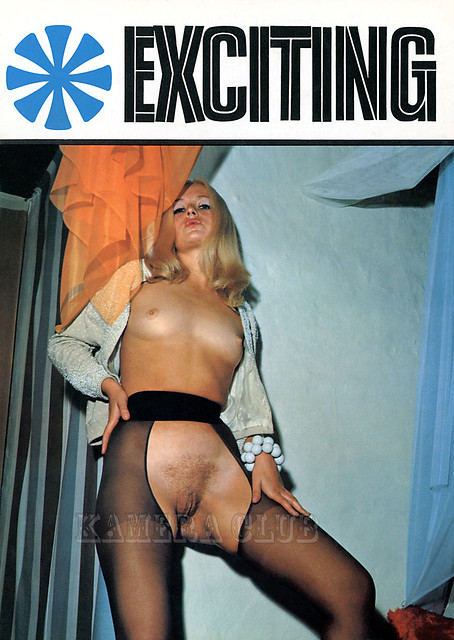 I finally got round to scanning one of the recent European magazines I acquired recently. This is the cover of Exciting No.30 published by Nordisk Bladcentral in the late 1960s, featuring a rather attractive blonde.

The magazine features 38 pages of different images, and the style of this magazine, and it’s sister magazine Cover Girl, was quite different. Each edition featured 3 or 4 models in various poses and various states of undress. Almost always they were wearing stockings and other underwear or stripping. Like almost all European girls of that era, all had a naturally untouched pussy.

The format of the magazine was 22 cm by 16.5 cm (8.5′ by 6′) in size and generally consisted of a glossy colour magazine cover. It featured the main model on front and back covers, with the front being a front view and the back being a rearview! The centre page featured a fold out tri-page colour shot of the cover model as well. The back of also featured a double page shot of a model in bi-colour. The rest of the magazine was a mixture of shots in black and white with colour borders or bi-colour shots.

The early editions featured the models in standard uncensored poses, but nothing too explicit. As you got into the late editions such as No.30 the poses of the models became more suggestive and explicit. With the large centre spread living up to its name and members get to see the beautiful blonde above spreading much more across three pages!

The reproduction quality of these magazines by Nordisk was fantastic, and the editions that I have are no exception. They are all mint condition with good paper quality and printing. The colours are fabulous and make the models stand out, and all needed little editing after scanning. Let’s not forget that all these images were also taken by renowned photographer Serge Jacques.